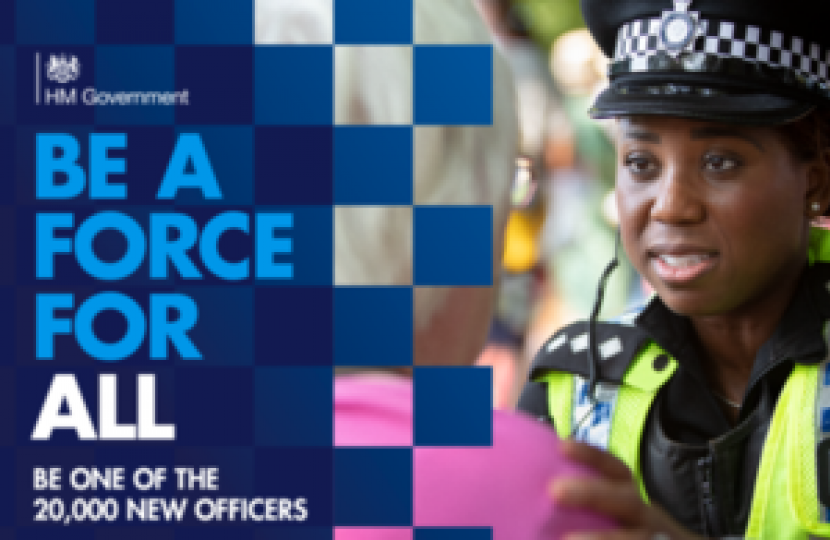 A national campaign to recruit 20,000 new police officers is launched today (Thursday) – urging people to join the police and ‘Be a force for all’.

The police recruitment drive is the biggest in decades and follows the Prime Minister’s commitment to increase police numbers over the next 3 years.

The Chancellor yesterday announced funding to support the recruitment of a first wave of up to 6,000 officers, who will be shared among the 43 forces in England and Wales. This includes £750 million for 2020 to 2021 and an immediate £45 million to kick-start recruitment.

The remaining 14,000 will be recruited in the following 2 years, backed by government funding, and will be additional to officers hired to fill existing vacancies.

Getting more police on our streets is an absolute priority and I’m delighted our recruitment campaign for 20,000 new officers is now under way.

I have been clear from day one I will give the police the resources they need and I am delivering on that commitment.

They have my full support and together we will cut crime, get criminals off the streets and keep people safe.

One of the government’s first actions was to commit to putting 20,000 new police officers on our streets, and the launch of today’s campaign shows we’ve wasted no time in getting on with the job.

Our police are the best in the world. They protect our people and communities and this government will ensure they are well resourced so they can tackle the crime on Britain’s streets.

By bolstering the police’s ranks we can help our dedicated officers tackle crime, protect communities and be a force for all.

The ‘Be a force for all’ campaign has been developed by the Home Office in partnership with the police and using feedback from the public via independent research.

It features serving police officers, including a neighbourhood officer, a police dog handler and a firearms officer. One of the officers started as a volunteer Special Constable, while another is a former charity executive who changed career.

They appear on billboards and digital displays at locations across England and Wales, including at shopping centres and railway stations, as well as in a radio advertisement.

A new website has also been set up to provide potential recruits with more information and direct them to the recruitment pages of local police forces.

A second phase of advertising is planned for the new year.

Today’s recruitment campaign launch, and the government funding to deliver it, represents a significant opportunity for policing. This net increase in officers will help us provide a better service to the public, reduce crime, and ease the unprecedented pressure on our people. It will also help us to accelerate our plans to improve diversity in policing.

It also opens up the exciting opportunity for a career in policing to many more people. If you want a varied career and to make a positive difference in your community, policing could be for you. We want to attract people from a range of backgrounds with a range of skills who will complement the able, professional officers and staff currently working across policing to keep people safe.

Recruiting 20,000 officers over 3 years is unprecedented. It will require significant planning, but we are confident we can fulfil this commitment with the right resources and support from the government.

Katy Bourne OBE, Chair of the Association of Police and Crime Commissioners, said:

Police and crime commissioners welcome today’s recruitment campaign launch. These additional officers will help our police forces to cut crime and deliver better outcomes for victims. We know that this is what the public want.

This is a huge opportunity for policing to deliver on behalf of all our communities. We will work to ensure the successful recruitment of these officers over the next 3 years.

A National Policing Board, chaired by the Home Secretary and bringing together government and police leaders, has been set up to oversee the recruitment drive and other major policing issues.

The Home Secretary has previously announced the Home Office is accelerating plans for a Police Covenant to ensure serving and former officers are treated with the respect they deserve.

The Home Office also extended a pilot relaxing conditions around the use of section 60 serious violence stop and search powers.

Meanwhile, police funding is increasing by more than £1 billion this year, including money raised from council tax and to tackle serious violence.

❗It's time to get your membership 🔴⚪🔵